Creator
Sulte, Benjamin, Speaker
Media Type
Text
Item Type
Speeches
Description
A turning point at the moment Confederation was enacted. A Canadian sentiment in existence three centuries ago: an historical review. Creating two new Canadas. The first talk about Confederation. The key to Confederation. Canadians, joining together with a declaration of patriotism and sentiment. Other provinces coming in: British Columbia, Prince Edward Island. The speaker, having seen the turning point and then the spirit of development, now seeing the crowning of it, and all in fifty years. Urging Canada to grow, prosper and multiply.
Date of Original
14 Jan 1904
Subject(s)
Canada - History
Nationalism - Canada
Language of Item
English
Geographic Coverage
Copyright Statement
The speeches are free of charge but please note that the Empire Club of Canada retains copyright. Neither the speeches themselves nor any part of their content may be used for any purpose other than personal interest or research without the explicit permission of the Empire Club of Canada.
Contact
Empire Club of Canada
Email:info@empireclub.org
Website:
https://www.empireclubofcanada.com/
Agency street/mail address:

Full Text
CANADIAN SENTIMENT BEFORE AND AFTER CONFEDERATION.
Address by Mr. Benjamin Sulte, Vice-President of the Royal Society of Canada, before the Empire Club, on January 14th, 1904.

MR. PRESIDENT,--You will recollect three previous occasions on which I had the pleasure of addressing Toronto organizations. It is long ago; the time runs by five, ten and fifteen years, but I remember it and some few of my friends in Toronto do recall those days with pleasure, because we met on those occasions to speak of matters that are exactly of the same nature as the subject I have to deal with today, the subject, as you have just stated, of the origin of Canadian sentiment, what it was before Confederation, what it has been after. I have made the calculation, if I may so call it, that there is a turning point at the moment Confederation was enacted, and we must not mind the past until this moment, then look on something else for the thirty-seven years that have elapsed since. Therefore you understand the division, as it were, of my subject.

If you wish to go, as I generally do, into historical matters as far back as possible, you will find that three centuries ago there was already a Canadian sentiment in existence. This is an easy matter to be traced when you meet with the difficulties of the first settlers in the Province of Quebec who were fighting then the influence of what they called the Frenchmen of France. You understand that at the moment of the English conquest there were two kinds of French in the country. The French of France went back to France, whilst the others who had adopted Canada for their home never dreamed of that. And another thing happened very soon after which is regarded by many historians. It is the fact that this little group styled themselves the Canadian nation, and I suppose the Frenchmen of France were surprised at seeing such a group of people in the far-away colony call themselves a nation; but it had originated in the fact that these people were in America for the sake of remaining there and were imbued with a particular spirit of patriotism, and had imbibed a sentiment from the soil which the French of France could not understand.

I thought for a moment I would not speak of these things because they are so old, but I do not think there is anything so obsolete that we may not bring back recollection of it, and this is a remarkable instance. So much so-but here I am brought to enter upon something which I must not forget. The same spirit existed somewhere else in the Thirteen Colonies alongside of our border, and they were at the same time trying to make use of it, but in a different way-by proclaiming their republicanism. Twice the settlers of Quebec, having created what we may style Canadian spirit through a patriotism derived practically from the new country, never conceived the idea of separating their loyalty from the Crown.' Therefore we have two examples of this wonderful thing. I say wonderful, because as a rule it is not admitted that colonies may have patriotism of their own. They may have one provided it is operated for them by the Crown. The French created a patriotism of their own, but they were steady and fast, and loyal to the monarchical ideal and to the Crown.

When the trouble was over and the thirteen states were distinctly separated to make a system of their own, well, it happened that a good many people amongst them declined the idea of going into a Republic, and of course you know them as the U. E. Loyalists. They came to Canada, that is to say, without making any error in the word, they did not come to Canada, but they came to the territories that were not occupied, for Canada was merely Quebec, and it was a little group of huts and that was all. In New Brunswick and Nova Scotia they formed new colonies, which action was exactly in accordance with the very spirit that already existed in the little Canada. Those people never dreamed, of course, that they were themselves creating new Canadas, and that one day their descendants would gather them all up together when they had grown a little and build a nationality out of them. Of course it was too much to conceive of in those days. They concentrated in New Brunswick, Nova Scotia and Upper Canada, because they were people that were loyal to the Crown and full of a spirit of patriotism-that is, of an attachment to the new country, and a desire to administer their own affairs in their own locality without too much participation by the Crown or Imperial administrators.

This land they had and they worked it, and generation after generation passed quietly in that state of things; but in the interval they had created a spirit of patriotism, which was a local one. It might be said that a Nova Scotian was not a man of New Brunswick, and those two people were nobody compared with him of Upper Canada. They were not French colonists, they had a spirit of what we call now provincialism, which they had never thought of before, but which they had created. Such was the position about sixty years ago when it was proposed to unite the four little worlds, and when the proposal to amalgamate them came forth-well, people began to realize that it was like bringing oil and water together. Everyone was as proud of his rights and as full of local patriotism as any man today could be.

You remember when the first talk about Confederation came, that it sounded like a bugle call to rally parties who were not at all prepared to rally. The astonishment was immense, and of course discussion followed. Our people are not so stupid but that even when they do not like a thing they like to discuss it. It took a long time. It was some fifteen years before we could come to a certain moment, where we can say, in 1867, that Confederation is formed. I remember those days. I was twenty-seven or twenty-eight years old, and I had ten years of journalism. I remember how often we thought it was not made at all, and, if I do remember, the very key to the thing, the very clue to it, was that the people in the four provinces were promised that they would not part with the British flag, and that they would retain the British institutions. As for Confederation, this we had, and it was agreed that the people did not like it, but that they accepted it under these conditions.

Now here we are, and this is the turning point of my subject. The past as I have tried to explain it, is, I think, very clear to you-the combination of these elements of not willing at all to go together, of how long will it last? It might last five years, ten years, three months, we did not know. The least little thing might break it asunder. Was there a man amongst us who could suggest a plan? If we could only get a man, of such prestige! Come, come, we were clever men. There was not a man to do this wonderful thing I am talking about. Well, look here. Do you hear that noise? Who is kicking in the North-West? Something has happened there; do you hear the yell of the half-breeds and even of the palefaces? " We do not want the interference of any Canadian." You will remember 1870. Then everybody looked at each other and said, "What is that? The Canadians. It is us, we all, they do not want us. Oh, we will see-for we are the Canadians." They found out union better than if all the big men of the country and even the women, had favoured it. We saw our volunteers start from the four Provinces. You know that soldiers make history and this time they made it well and they made it beautifully, and the next day after this squabble you could not find amongst the Provincials, for instance, any repulsion towards Confederation. They were all Canadians, and who the mischief is not a Canadian? We gained more by these six months of trouble than we could have achieved or gained by any other combination, either political or scientific, if science enters into these things. There was already the element of patriotism and sentiment in existence in these little colonies and they found that they were shaken and realized their situation. They joined together and proclaimed themselves Canadians.

Then British Columbia came in without any trouble, to be a Canadian Province; then Prince Edward Island came in to be Canadian without any talk or restriction. Since that time, as you are all aware, all the children of the present generation are without exception Canadians.

There may be still some old men, older than I, and that is hardly possible, who have kept some of their old ideas, but they are very few and far between, and they are, as a rule, quite determined to allow matters to pass into the hands' of others, so we are now at this period, 1904, so wonderfully permeated with a sentiment of patriotism that those who made Confederation could never have dreamed of a thing like it. I heard men say even then, " Time will bring it." Well, time is a very big expression. If we had not had two or three occasions to step forward with a rapidity that few nations have had, we would not be where we are; but where we are, I think, only now requires the 'wisdom and the care that any nation must have in order-to develop itself. There is no need to create a national spirit. It is in full existence. I, for my part, have seen the days when we attempted to create one without much success. I have seen the turning point and then the spirit of development and now I can see the crowning of it, and all in fifty years. We ought to be proud and thank the Almighty for all His benefits. England, France and Spain to obtain unification had wars and wars for three hundred years. All I have to say in closing is this: Take the expressions of my great desire for the success and prosperity of this country-grow, prosper and multiply. 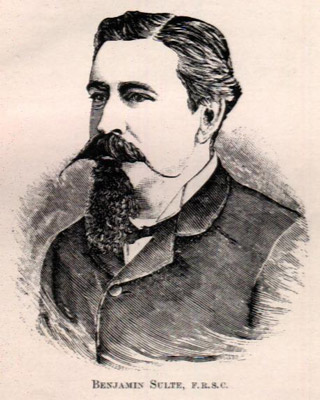